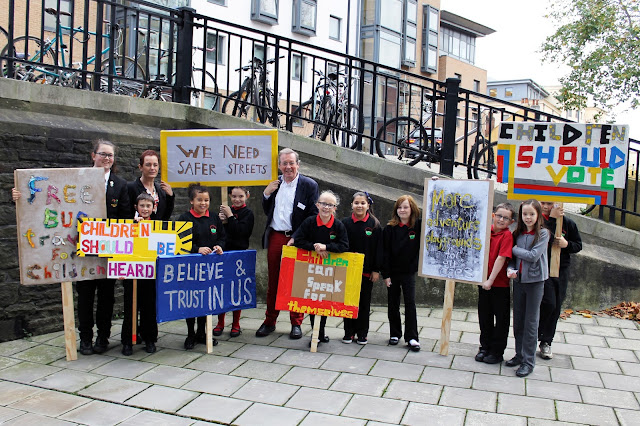 As Bristol celebrates its first Festival of the Future City, where do children fit into the picture? Despite almost 25% of the city’s residents being aged 18 or under, this demographic is a neglected one.

The Bristol: Child Friendly City working group – comprising the Architecture Centre, Playing Out, Room13, Hareclive and the University of Bristol – aims to highlight the rights and needs of children and young people as active Bristol citizens, as well as encourage us to see the potential in this vital city asset whose creativity and ideas could be key to developing city solutions.

The first steps towards this aim were taken last week at Towards A Child Friendly City, a symposium designed to bring together a wide range of people from different backgrounds (from Play, Youthwork, Research, Health, The Arts, Urbanism, Community work, Education, Grassroots activism), and ages (around 20 children and young people aged 9-14 from Hartcliffe and Easton took part), all of whom have thoughts and experience to share and contribute to the beginnings of a vision for Bristol’s future as a more child friendly city.

As well as hearing presentations from Mayor George Ferguson, the event enabled adults and children to work together to agree further calls to make Bristol more child friendly, to add to those already collected this year. Strong, repeated messages included: ‘safer streets’, ‘free transport for children and young people’, and calls for children and young people to be heard and trusted.

The idea of the Child Friendly City was born from the United Nations Rights of a Child and is a global UNICEF project, with the aims of fulfilling the right of every young citizen to participate in and express opinions on the city in which they live, safely, equally and with respect and influence.

Children have no democratic rights, financial power and little control over their physical environment and life situation, and yet they are citizens with rights and responsibilities – a fact that is largely overlooked. For obvious reasons, children need adults to act with them and for them to uphold their rights and enable their full participation, which is particularly important considering children will be future adult citizens. Their experiences now will shape future behaviour, choices and the city. Plus, children as citizens have much to contribute to the life and improvement of their city.

The need for Bristol to be more of a child friendly city will have occurred to many people living or working with children and young people in the city over the years, but it was Bristol being made European Green Capital 2015 and the desire to create a fitting legacy for children (when so many never get to benefit from all that Bristol has to offer) that spurred the partners to do something. With other UK cities (Bath and Leeds) already working towards becoming Child Friendly Cities, Bristol is well-placed to make its own contribution to the debate. 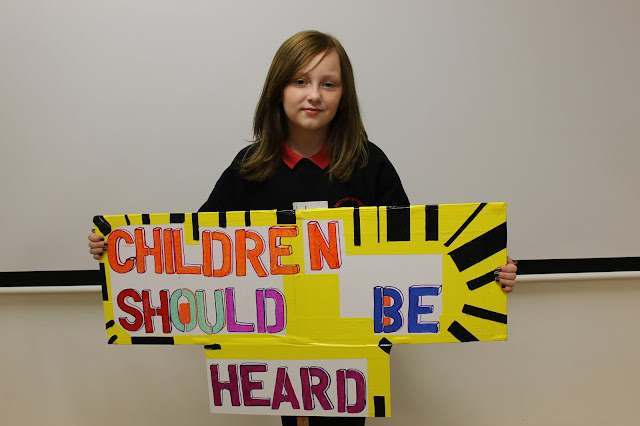 Towards A Child Friendly City

“A child-friendly city is a healthy, happy, liveable and playable city.  A city that fosters active citizenship among young people and, as an integral part of that, creates an environment for children to voice their opinions.  It’s about freedom of movement, and access to public space, as well as resources.

“All of these things should be at the heart of every decision we make as a city council. If we think about the child, and co-design our city with young people, we’ll all make far better decisions. I looking forward to us becoming a UNICEF designated child-friendly city.” 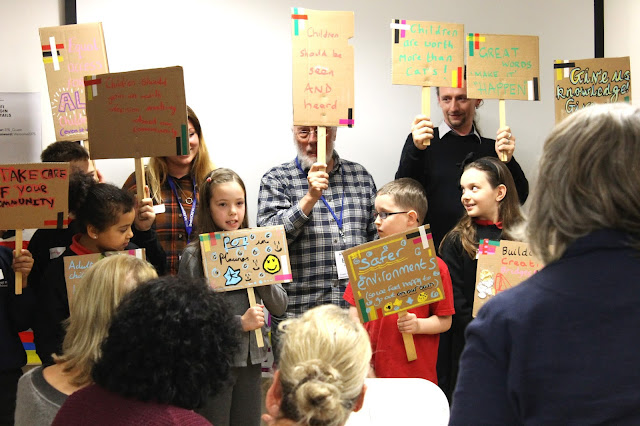 As well as the support of George Ferguson, the Bristol Child Friendly City working group has the involvement of children and young people from communities such as Hartcliffe and Easton.

Lauren Lloyd (aged 15) from Room 13, says “In Room 13 I know that my opinions matter. We think, we ask questions and we share. If I had not experienced this my future decisions would be different. I think differently now. Can Bristol help other children feel like this? Can Bristol help us feel valued and important?”

Dr Debbie Watson and Dr Helen Manchester from the University of Bristol lead the research side of the initiative, while the Architecture Centre, Playing Out and Room 13 Hareclive are the grass roots partner organisations driving the Child Friendly City Network in Bristol. They work with children and communities across the city and strategically with decision makers such as the city council, urban planners and many other groups who work closely with children and young people, to bring about change.

Part of the University of Bristol’s annual Thinking Futures Festival, the Towards A Child Friendly City symposium was supported by Policy Bristol and the Economic and Social Research Council (ESRC) as part of the national ESRC Festival of Social Sciences. The symposium event marks the final phase of Bristol Child Friendly City ‘Year Zero’, a time of conversations and initial engagement with people across the city. With a desire to deliver more activity next year, the Working Group’s child-focussed ‘live’ projects continue with activities such as Mayoral Hustings for children and young people. 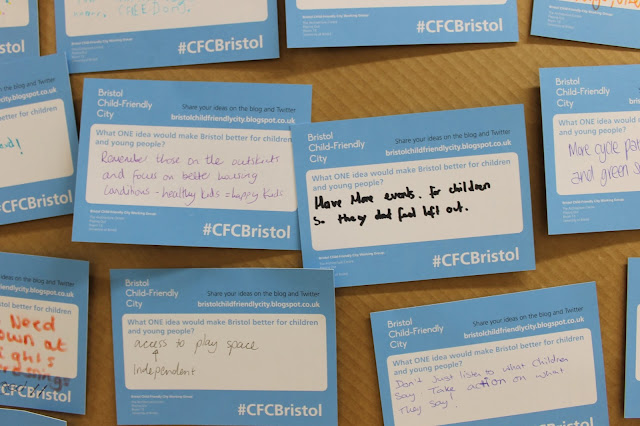 Background to the project

A child friendly city research project by the Architecture Centre, a registered charity that champions betters places for people, was a catalyst for the creation of the Bristol Child Friendly City Network.

“The Architecture Centre is passionate about involving everyone in the processes that shape our city,” says Amy Harrison, the Centre's Learning and Participation Manager. “We believe that children and young people should have a voice in the development of their city, and that access to good quality spaces and the cultural life of the city should be a right for children and young people from all neighbourhoods.”

Room 13 Hareclive, based at Hareclive Primary Academy,  plays a prominent role in working with and ‘hearing’ children and families in Bristol. Says Ingrid Skeels, Development Worker, "Room 13 has been a child-led space in Hartcliffe since 2003, encouraging children's creativity and voice. We know from what we hear that children are very much affected through their families, community and school by decisions made at both government and local levels, and that they have many concerns about their lives, city and world.  We also know they have tons of good ideas, energy, and different and interesting ways of looking at things; ways that are often very fair and caring for all. It's time all children were listened to as citizens and given a voice within the city, if we truly want Bristol to be a great place for all."

Giving young people from Room 13 Hareclive, Hartcliffe and Felix Road Adventure Playground, Easton, a contributing role in the Towards A Child Friendly City symposium was an important statement of intent. Harnessing this potential is what Child Friendly Cities are all about, holding true to the principle that ‘if a city is successful for children it will be successful for all people’.

"Children living in urban areas, particularly the inner-city, need the freedom to play out, get about actively and independently, feel part of their community and access all their neighbourhood and city has to offer,” says Alice Ferguson, Director, Playing Out. “For us, a truly child-friendly Bristol would be a place where all this is not just possible but completely normal - where children feel safe and welcome in streets and public spaces and where their needs are given high priority in planning and decision-making".

Tying in with Bristol’s major agendas and current thinking around Learning City, Resilient cities, and the Age Friendly/All Age Friendly agendas, the emerging Child Friendly City Network and the Symposium will both act as an important legacy to the Green Capital year.

A pop-up exhibition about the Bristol Child Friendly City Network and Symposium will be in display in the Architecture Centre's public gallery from 24 November 2015 - 25 Jaunuary 2016. 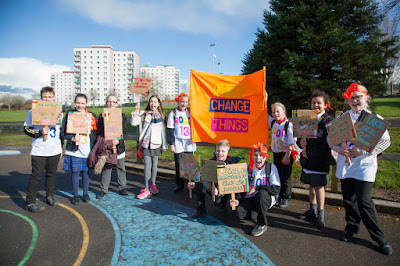 Children from Room 13 Hareclive, an artists’ studio in Hartcliffe co-run by children, carried out research into playing out in their area. They interviewed children of all ages in their school and also some parents. Speeding and dangerous driving were identified as a major barrier to children having more freedom and playing out in the area. Room 13 was then commissioned by Playing Out (and funded by BCC) to devise a creative response to this important issue. The result is The Sad Reality, a wonderful, humorous and inspiring film devised, written, acted and filmed by children in collaboration with the Room 13 adult artists. So far, children themselves have presented their film to their community at St Andrew’s church, Hartcliffe, where they marched to the venue with placards calling for change; and to wider audiences at Bristol’s City Hall and The Bristol Festival of Ideas, Festival of the Future City. This is a brilliant example of children’s voice in action and an imp